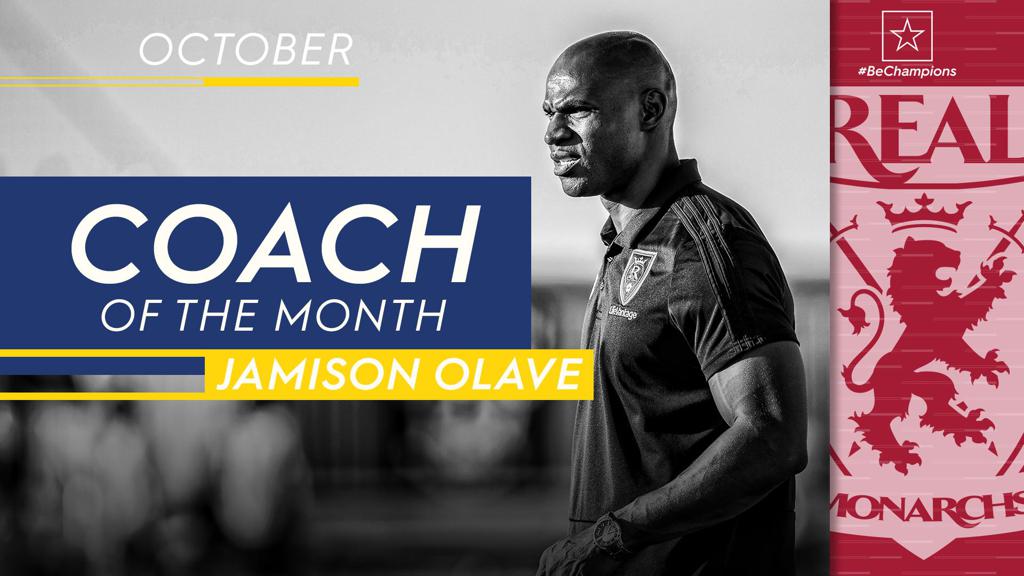 TAMPA, Fla. – Real Monarchs SLC’s Jamison Olave has been voted the USL Championship’s Coach of the Month for October as his side won three of its last four contests in the regular season to clinch a top-four finish in the Western Conference for the third consecutive year.

The Monarchs went 3-0-1 over the final month of the regular season, becoming the first team to defeat Phoenix Rising FC at Casino Arizona Field this Championship campaign while also notching key home victories against Orange County SC and Sacramento Republic FC that earned Real 11 home wins in the campaign.

Olave took the reins on the sidelines for the Monarchs on July 1 after the resignation of former Head Coach Martin Vasquez and led the side to a 10-4-3 record with a +16-goal differential over the second half of the regular season. This past Saturday, Real claimed its first victory in the USL Championship Playoffs in club history, a 6-2 win against Orange County SC, and is now preparing for a contest with No. 1 seed Phoenix Rising FC in the Western Conference Semifinals on Friday night.

“It feels really good to receive the Coach of the Month award,” Olave said. “The real credit should go to the players and our whole staff for all the hard work and dedication they’ve put in over the last month to get us to this point. The players have done what we’ve asked of them and they’ve been rewarded with the results. But the job isn’t done yet and we have to keep the same mentality because there’s more work to do. We’re going into the match in Phoenix looking for the result we want because we want to win the Cup.”